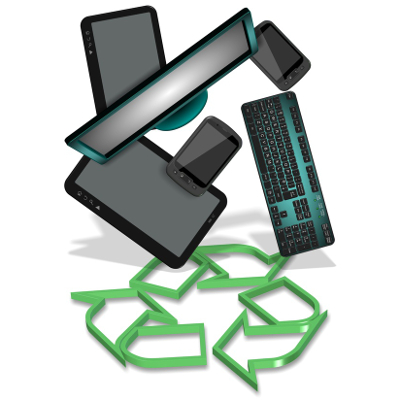 When it comes to getting new technology, it’s typical to spend a significant amount of time agonizing over which product is the best. All the while, little regard is given to the disposal of one’s old tech, which often gets tossed in the trash. You may not have realized it, but haphazardly disposing of our old technology is wreaking havoc on the environment.

The Side Effect of Our Throwaway Society…
The problem with e-waste starts with how our consumeristic culture approaches technology. In our quest to have the latest gadgets (often for the shallow sake of status), we end up disposing of perfectly-good working tech. In fact, the average laptop is used for only two months. Cell phones fair comparatively worse, getting only 18 months of use before they’re traded in for a newer model. This, despite the fact that these devices are built to last much longer than a few years.

It doesn’t seem very likely that our country’s throwaway approach to technology is going to change anytime soon. After all, the sales angle of convincing consumers that “their current device isn’t cool anymore and that they need to buy the latest to be hip” is the foundation of every tech manufacturer’s business model. Although, at the same time, there is some merit to upgrading your technology in terms of gaining better security and increasing productivity. But is gaining these benefits worth the toll that e-waste takes on the environment?

…Is Destroying Other Societies
When you toss out your old laptop, you may think nothing about where it ends up. You might just assume that it’s in a landfill buried underneath a metric ton of soiled diapers. However, the truth is a little more grim: 70-to-80 percent of all e-waste from first-world nations is shipped to landfills in other, less privileged nations.

Why is this? Contrary to what you’re thinking, it’s not to give needy people secondhand technology so they can ease their burdens by playing Minesweeper. Instead, e-waste gets dumped onto these poorer countries because they don’t have much in the way of environmental laws, allowing them to straight up open-air burn the e-waste in order to extract valuable metals. However, as is the case with all environmental laws, it’s important to remember that, just because your country has its act together and has gone green, doesn’t mean that the rest of the world has, too. This transcrepany translates to the worst of the waste getting outsourced, which is counterproductive. At the end of the day, air quality, rain clouds, and the ozone are no respecter of borders.

Once your old laptop makes it to an under-regulated country, it’s then processed at the expense of the local population’s health, due in part to the poisoning of their groundwater from lead runoff. Environmental disasters like this cause lead poisoning for local children along with elevated rates of miscarriages. This is the sad case for one of the world’s largest processing hubs of e-waste, Guiyu, China. In Guiyu, 5,500 businesses process 1.5 million pounds of discarded devices every year. See for yourself photos of e-waste in Guiyu from Time: 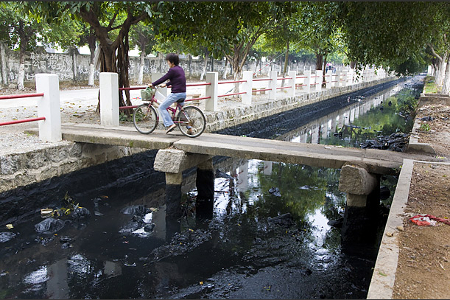 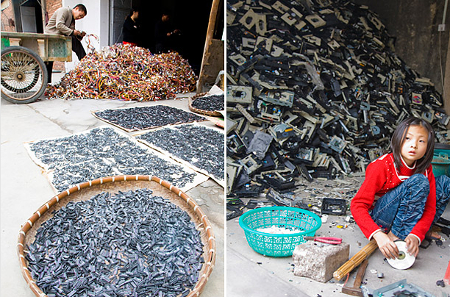 E-waste is Basically Toxic Waste
The problem with e-waste is that it contains some pretty serious toxins. Consider the following:

Some Grim E-Waste Statistics
Unfortunately, the e-waste problem is getting worse. As reported by TechRepublic:

In 2012, the US generated more than 9 million tons of e-waste, which was a huge jump from its 2 million tons in 2005. According to the EPA, 141 million mobile devices were ready for end-of-life management in 2008, but they made up less than 1% of discarded electronics. Of the electronic waste the US generated, only 25% was recycled. The other 75% was sent to landfills in the US or abroad.

Keep in mind that these statistics only apply to the United States. Looking at the global picture, the e-waste problem is growing exponentially; especially since markets that previously lacked access to technology connect to the global grid.

Change Starts with You
The e-waste problem feels like it’s grown too large for any of us to make any real difference towards, but you can make a difference just by changing the way you approach technology. Instead of buying into the throwaway culture that encourages people to toss out perfectly-good-and-working technology, try donating your old tech to someone that could use it, or even better, simply fight the urge to unnecessarily upgrade out of sheer obligation to “keep up with the Joneses.”

Additionally, you can be intentional about disposing of your e-waste properly. You can have an IT company like COMPANYNAME handle your e-waste so that you don’t have to. We deal with e-waste every day and have green procedures in place to dispose of it in a way that has minimal impact on the environment. Before you toss your old tech in the trash, give COMPANYNAME a call at PHONENUMBER.