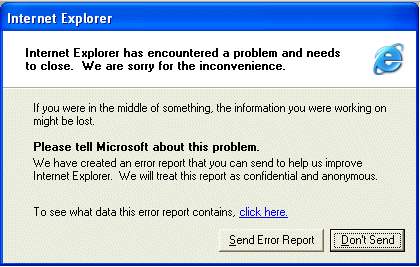 If you use Internet Explorer, you may have noticed that it can be a bit buggy at times. Perhaps if Microsoft had more information about the causes of its software issues, they could develop a better product. This is the purpose of software error reports, which largely go unsent and unread; or at least, that’s what Microsoft thought.

Every Windows user is familiar with the error report. It’s the pesky window that pops up after a program (like IE) has crashed. The report includes a reason for why the program crashed, and it gives the user the option to send the report to Microsoft. 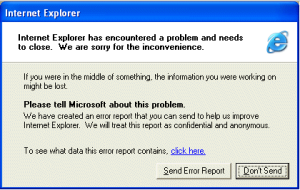 Ah yes, that’s the window we’re talking about. We’ve all seen this report. It usually appears at the worst possible time.

For the developers of IE who are tasked with improving the browser, it is important to get their eyes on this report so they can to determine what exactly caused the crash. Unfortunately for Microsoft, users have never cooperated, choosing to avoid the “Send Error Report” button altogether. In fact, 8 out of 10 users will select “Don’t Send,” much to the chagrin of Microsoft.

Microsoft Finds Unsent Error Reports in the Worst Possible Place
It turns out that clicking “Don’t Send” does more than previously thought. In reality, “Don’t Send” causes the error report to actually send, and it’s been this way ever since the first version of IE. After recently discovering this, the engineers at Microsoft have been tasked with tracking down the destination of these long-lost reports.

After months of analyzing hidden code, they’ve finally tracked down and uncovered the error reports at a most unfortunate location: 232 Santa Margarita Ave., Menlo Park, California.

Sound familiar? This is the famous garage where Google got its start with seven employees back in 1998. This same year is when IE held a 40 percent market share and was peaking in popularity. Meanwhile, Google wasn’t even a blip on Microsoft’s radar. While the story behind Google’s success has always thought to have been the vision of its founders to “build a better search engine,” it turns out that Larry Page and Sergey Brin had an advantage; boxes and boxes of “unsent” Internet Explorer error reports.

Google was only in the Menlo Park garage for five months before moving on to bigger and more spacious things. However, as uncovered by a legal team from Microsoft, they’ve left crucial evidence behind; dust-covered boxes of “unsent” IE error reports from 1998-99 were uncovered in the home’s attic.

It’s unclear what Microsoft’s next move is, but one thing we know for sure; if Google is in error here, then this is one costly mistake that they can’t unsend. For their actions, Microsoft has already filed an injunction against Google and its Chrome browser to cease and desist all operations by April 1st, April Fool’s Day.