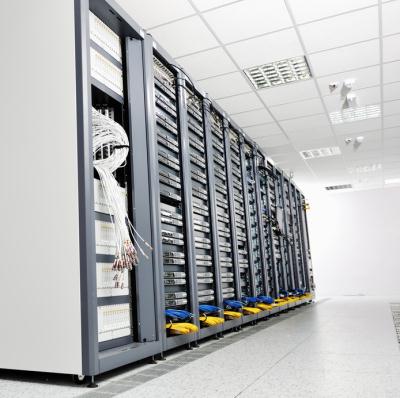 Have you ever stopped and wondered where the internet is housed? Maybe all the websites are on a skyscraper-sized router? Maybe the internet all fits inside your computer? Most of the information is actually stored in data center facilities all over the world, and the sheer size and complexity of these centers will boggle your mind.

When it comes to housing massive amounts of Data, Google takes the cake. This should not come as a surprise, the amount of data Google stores on YouTube alone is staggering, YouTube averages 72 hours of video uploaded every minute, which makes for over 100,000 hours every day, and 37.8 million hours annually. Within the bowels of these data centers, all of these videos are stored away and categorized for retrieval; and it gets better, these videos are being watched faster than they are being uploaded, over 4 billion hours of video are watched every month.

YouTube is just one arm of the Google Empire, Google Docs and Apps, Google Earth, Blogger, Gmail, Google Chrome, Android, and the classic Google search engine, all deal with so many users and so much data, it can make you feel like just a low-resolution spec on Google earth. One more stat, Google.com averaged 7.2 billion page views per day in 2010, this is more page views then there are people on planet Earth.

Despite Google’s mission to make the world’s information accessible, they do not like to share too many details about how they store it all. In fact, the number of data center facilities operated by Google remains speculation. Google officially lists six data centers in the US and twelve total centers worldwide, but several credible sources (people who call themselves Google Watchers) estimate the numbers are likely 2-3 times that.

The extraordinary measures Google takes to safeguard the locations of their data centers is testimony to the value of data. The security measures in place at each data center are comparable to Ft. Knox, teams of security guards, multi-factor identification processes that includes iris scans, and remote locations surrounded by fields and lakes, all keep people out that do not belong. On top of security precautions, data centers also have multiple levels of backups in place to keep data safe; multiple backup generators are ready to go, copies of the same files are stored over multiple centers, and every server has a battery in place to ensure no data will be lost when power is switched over to auxiliary. Google understands that if something happened to fifteen years of data, the world would no longer trust Google with their information, and Google’s giant empire would come crashing to a halt.

The design of a Google data center varies from location-to-location, new data centers are built to work with the newest technology, and Google is a major developer of their own technology, another reason for secrecy. Site plans submitted to local planning boards show three 68,680 square foot data center buildings and three smaller administrative buildings in “The Dalles”, Oregon. Plans made in Lenoir, North Carolina show a139,797 square foot data center, with plans to expand to a second 337,008 square foot building. The fact that Google is able to keep any of their giant facilities out of the public eye is a testimony to their commitment to security.

Check out this great walk through tour of a Google Data Center in North Carolina:
http://www.google.com/about/datacenters/inside/streetview/

With all the talk these days about virtualization and backing up to the cloud, keeping your data in a secure cloud is becoming a very viable solution for businesses of all sizes. Google is the ultimate example of data storage, but even the basic data center components of security and server utilization are offered by your New Jersey IT companies. Quikteks can act as your companies own data center, you can use our servers to backup your files and virtualize your network in case of crashes and disasters. Avoid the expense of building your own 600 million dollar data center; give us a call today at (973) 882-4644, we will be happy to discuss with you the savings and security benefits that come with storing your company’s data offsite.