Smartphone Malware Is a Serious Threat

Smartphone Malware Is a Serious Threat 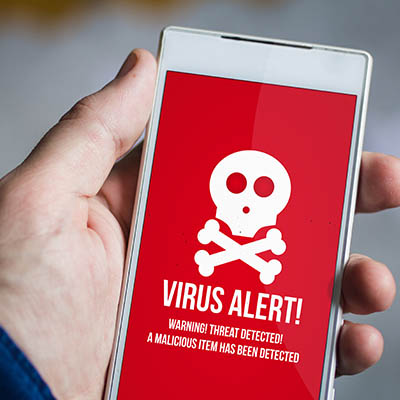 Most of us are well aware that we need security software to keep our laptop and desktop computers from hackers and cyber-threats. It’s the first thing you do when you get a new device, because the risks are now well-known, even to casual computer users. But it shouldn’t stop there. Smartphones today are mini-computers that are also at risk.

Although cybercriminals were slower to target smartphones and mobile devices, the smartphone malware threat has been around for a long time, although at a lower level of intensity. It’s just that malware geared to phones hasn’t been as high profile as threats to laptops and desktop computers. But attacks against smartphones are just as much of a problem.

People don’t use phones in quite the same ways as they use home or office computers. Many people don’t use their phone quite as much for doing things like surfing the web or using email. More on this below. But if you do use your phone for these purposes, as well as installing those handy apps we all love, you could still be at risk. Those risks can be broken down according to whether you have an iOS or Android smartphone.

The iPhone’s iOS system is the safest mobile operating system around, according to Apple. It may have good security features but that doesn’t mean it’s immune to security attacks. If you’ve ‘hacked’ your iPhone to customize it (known as ‘jailbreaking’), then the built-in security restrictions may not be fully intact. If you haven’t, you have less to worry about, but there are other risks. A less common problem, but still one to be wary of, is what’s known as a zero-day hack. This is a major risk, which targets devices that haven’t updated their security soon after a security update is released.

An issue with the iPhone operating system is that there aren’t too many things you can do yourself to avoid problems. For the safety of your device you have to rely heavily on Apple itself. They don’t want their reputation damaged, so they’ll do their best, but you should still be alert to the possibility that iPhone security can be compromised your iPhone can be hacked or infected with smartphone malware.

It’s a different scenario with Android smartphones. Android devices are more at risk because there are so many different companies making Android phones. Different manufacturers use slightly different Android versions. If you have a Google Pixel and a Samsung Galaxy Note 10 then you’ll get security and other updates for them on a slightly different timetable.

The design of the Android system makes it more flexible and open than Apples iOS. This makes Android phones easier to customize and if you want to install apps that Google hasn’t vetted you’re free to do so. Again, customizing or ‘jailbreaking’ your phone can comprise the inbuilt android security measures.

Even apps from the Google Play Store aren’t necessarily safe, since some can carry smartphone malware. Google tries to deal with this, but there’s always room for error. Ultimately, it’s still down to the user, and being careful about which apps they choose to install on their phone. There’s no reason to ditch your Android phone or restrict employees from using Android devices to access company sites and systems. It comes down to how the device is used. Many people never have a malware problem with their Android phone.

If you need help with mobile device security policies and protection of your company data, Quikteks can help. To learn more, give us a call at (973) 882-4644.