Simon Pierro, the “Wizard of iOS,” is a Different Kind of Magician [VIDEO]

Simon Pierro, the “Wizard of iOS,” is a Different Kind of Magician [VIDEO] 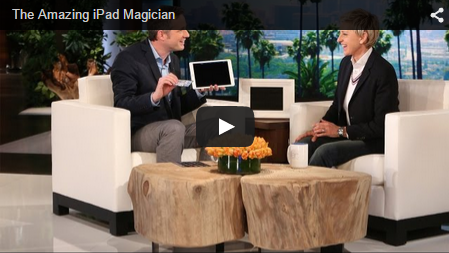 Do you remember the good old days when a simple magic trick was capable of bringing a smile to anyone’s face? Optical illusions, card tricks, or sleight of hand; all of these are basic tactics used by the average magician. However, Simon Pierro, a German magician, uses his iPad to come up with mind-bendingly spectacular tricks that take advantage of modern technology.

Essentially, Simon Pierro uses his iPad to perform tricks that have astounded millions of viewers worldwide. His videos on YouTube have gathered well over 80 million views, and counting. If you watch his videos, it’s easy to see how they’ve garnered so much attention. He’s able to pull objects off of his iPad screen, transfer them to other devices, and pour milk on top of his friend’s head… through the device’s screen.

Does it sound impossible? Think again. Check out this video to watch Pierro bring some “new updates to iOS 5” to life.

Granted, there’s no way a mere human can pull the sun out of the sky and put it in their pocket, and we highly doubt that Apple offers the incentive of free tennis balls for users of its products.

Pierro also had the opportunity to show off his latest tricks in front of a live studio audience on The Ellen Show.

And here, Pierro is operating his own keg at an Oktoberfest event in Munich. Some of the bystanders are probably wondering if it’s just the booze, or real magic at work. Can you spot how Pierro is able to pull off these tricks? A few are somewhat noticeable, but we don’t really feel we need to know how it was pulled off. Sometimes it’s better to just let yourself believe that there’s something else at work.

Similar to Pierro, Quikteks is known for producing magic of another kind: Our managed IT services. Modern technology can be tricky, as Pierro has made evident. It functions in ways which our predecessors never dreamed of. In fact, technology is so important to the modern business that a company that’s not taking full advantage of it will find themselves falling short of the competition.

What’s your business’s technology situation look like? If you feel you could use a hand (or a sleight of hand) now and again, Quikteks has your back. Give us a call at (973) 882-44644 to learn how you can make you technology run so smoothly, it feels like magic.