Project Loon by Google, Internet above the Clouds

Project Loon by Google, Internet above the Clouds 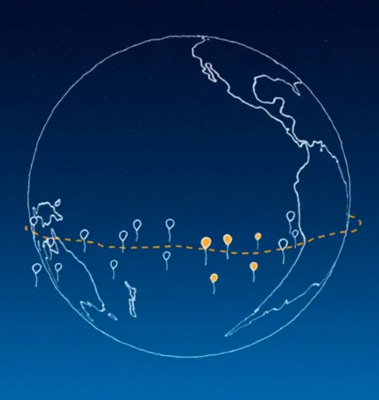 The benefits that come with a society that have Internet access can help people in dramatic ways. According to Google, only 1/3 of the world’s population is enjoying these benefits. The rest of the world is out of reach from the Internet’s communication lines and satellite signals. Google plans on bridging this gap by using balloons.

Dubbed “Project Loon,” Google has specially designed balloons that are 49 feet in diameter and float in the stratosphere, which is 12 miles above the Earth. This is high enough to float safely above the mountains, clouds, and airplanes. A single balloon can provide Internet speeds up to 3G and covers 1,250 square kilometers, which is roughly twice the size of New York City.

Google is not just floating one balloon up into the stratosphere; they are sending a network of them, 300 to be precise. Each balloon will be connected in order to provide users with continuous signals whenever one balloon floats beyond reach. Users of the Loon network will be able to receive the Internet signal with an antenna shaped like a red pin from Google Maps. The signals will transmit from ground stations spaced 60 miles apart that are connected to the local ISP.

The beauty of the balloon is that it runs on 100% renewable energy. It has solar panels to power the equipment, and it navigates by sailing with the wind currents. The solar panels can produce up to 100 Watts of power in full sunlight, which is enough to power the equipment and charge the battery for use at night. Wind is used to propel the balloons, and altitude levels are automatically adjusted to place the balloon in different wind currents, giving the balloon the ability to navigate in different directions. Using complex algorithms, the balloons communicate with each other to fill in the coverage gaps and move where they need to.

Project Loon is currently being tested in New Zealand. There are several disconnected regions in rural New Zealand, but the implications of a network in the sky goes beyond providing Internet to sheep farmers, it will also serve as an emergency network for areas hit with a disaster. In 2011, Christchurch, New Zealand was hit with an earthquake that left 185 people dead and a major city without Internet for weeks. In emergency situations like this, lives depend on having working communications.

If project Loon is successful, then Google will look to move to the next phase. It’s an ambitious goal to connect the world’s five billion people that do not have the Internet with the nearly two billion that do. If this can be achieved, then the Internet will hold 3x the amount of world-changing ideas, educational resources, and cat videos than it does now. What do you think? Will balloons make the world a better place, or is this project as loony as it sounds? Tell us your thoughts in the comments!