Backups Are Crucial For Users

Backups Are Crucial For Users 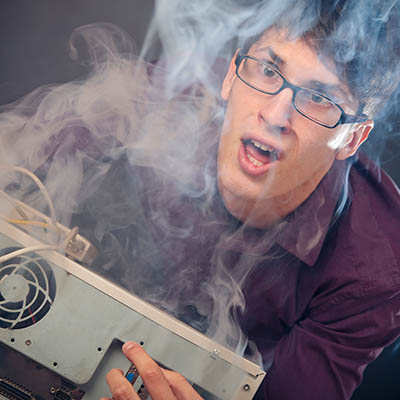 Losing your data isn’t just annoying. It can be disastrous. Lots of people have told us their stories about the consequences of losing their personal or business data. Thanks to everyone who let us know about and share their experiences of data loss. Don’t forget to share your own stories with us in the comments!

Let’s start with a story of someone who learned some lessons at college that definitely weren’t part of the curriculum.

I have lots of memories of great times at college. Not everything went as planned though, and there’s one bad experience that still bugs me today. It was when my computer let me down big time and I nearly failed my sophomore year.

I was a journalism student at college, so writing was the core of the course. My sophomore year began pretty smoothly. I got some of my general studies courses done so I could focus on my professional career path. Each week I wrote a few articles for the student paper. I travelled abroad for a few weeks in the fall and compiled a substantial collection of digital photographs.

The computers for students to use on the campus weren’t close to the dorm, so it was a great thing when my Dad surprised me with the gift of a computer. It made it easy to create and edit my copy in the peace and comfort of my room, without having to trek across campus. Everything was going great – but then, as the first semester drew to a close, everything came crashing down.

Of course I’d heard about data loss and the importance of backing up my stuff, but I didn’t think a catastrophe was going to happen to me. It wasn’t like the computer was old or outdated, and likely to malfunction. My dad had just given it to me, only a short time before. It’s not as if I didn’t keep copies of most of my files on the machine. So I was all set and on track.

It all started coming unstuck just before Thanksgiving. I was in a hurry. My roommate was all organized, with just a few classes to attend before she went home for the holiday. I wasn’t that organized. I’d bitten off more than I could chew and had a number of assessments to do before break, to avoid having to play catch-up down the line. One of them was a research paper for my global history course. I think it was on the Hussite Wars. I’d prepared an outline and was all set to get going on what was meant to be a major paper, fully referenced.

While my more efficient roommate was watching Miss Congeniality for the third time. I was vaguely aware of Sandra Bulllock using the SING technique to teach self-defense in the background. Then something strange happened. First my new computer started making strange noises. Then the screen died.

First I was in a state of shock and disbelief. That soon turned to panic. Sure enough, when I investigated, my worst fears were realized. Everything – and I mean everything – had disappeared: my old files, my paper draft, my image files from my trip abroad… the whole lot. And, since my backups (which weren’t very comprehensive anyway) were on the hard drive, they’d gone too.

It felt like I’d been kicked in the gut and punched in the chest.

Campus IT services were closed at that time of night, so I had to wait till the morning. I had a terrible night’s sleep but still hoped that the experts could sort it out. Maybe it wasn’t as bad as it looked. Well, they got the computer working again, but there was just no way that my precious files could be restored. The data loss was irreversible.

That cast a pretty large black cloud over my break. All the time I’d spent on the research paper was down the pan and all the hard work I’d completed would have to be redone from scratch. Worst of all, I’d lost all my travel photos. That’s the loss that hurt the most. Here’s where the story gets a little bit better. My dad reminded me that I’d given him a CD of my travel pics. Making a copy of the CD was easy. I felt just a little bit less stressed out.

But I still had to stay up all hours over the next few weeks to get back on track. I managed it somehow, but it was a miserable time. I’ve learned my lesson now. I don’t use CDs anymore, but I always keep backups of my work.

How to Do Things Right

To avoid the hassle and misery of data loss, always back it up – no exceptions, no excuses. You should always have more than one copy, stored in different places. It’s also not enough to back up every couple of days, or just when you remember. Backups should be made several times a day. Ideally, your system should be geared to running continuous backups, so that if the worst case scenario does happen then you’ve only lost a few minutes’ worth of work at most.

Many thanks to today’s contributor for sharing that story. We’d like to remind you that Quikteks can help you or your company with your data backup and continuity needs. Reach out to us at (973) 882-4644 to learn more about backup solutions, so that you never have to endure the hassle and misery of data loss.