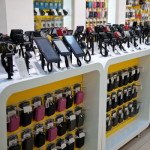 It was the sad end to a tech era last February when RadioShack declared Chapter 11 bankruptcy and announced plans to sell between 1,500 and 2,400 of its stores. IT techie’s around the country are mourning the loss. It almost feels like losing a friend that’s always been there for you. We need closure, so let’s all gather around the store’s silicone grave and say a fond farewell well to RadioShack.

The history of RadioShack dates back almost a full one hundred years when it was founded in 1921 by two brothers, Theodore and Milton Deutschmann. The store dealt primarily with amateur and ham radio equipment, thus the “Radio” part of the company’s name. The “Shack” half of the name originated from the small, wooden structure that housed radio equipment for boats, which made sense because their primary customers were ship-owners off the port of Boston that needed radio equipment for communication.

The rest of RadioShack’s story is well documented. RadioShack eventually expanded into selling virtually every type of consumer technology under the sun. If you needed cameras, televisions, computers, cell phones or those sweet remote control cars then RadioShack was your destination. RadioShack’s stock prices peaked in 1999 and its number of stores reached 4,297.

Several factors contributed to RadioShack’s demise. The rise of the internet allowed consumers to find specialty items online; this was exacerbated by poor management practices. For now, let us not focus on the negative. Instead, let’s remember the good times. We could ramble on and try to put into words how great RadioShack was, or, we could walk down YouTube memory lane and post some sweet RadioShack commercials. We’ll never forget you, RadioShack!

1978: 20%! 30%! 40%! 50%! 1980s: Joysticks Not Included 1984: “More Than 100 Programs for Fun and Learning” 1987: A Totally Portable Phone for Only $2,495 1989: “Go Where You Want to Go, Call When You Want to Call” 1990: The Affordable and Portable Cellular Telephone 1994: The Best in America, RadioShack Early 2000s: Terri Hatcher and Howie Long Make a Cute Couple 2005: “You Know How Much I Love Cars!” 2014: Super Bowl Hail Mary Play–Featuring Every 80s Celebrity Ever 2014: Not even the Star Power of Weird Al Could Save RadioShack Wow. No more RadioShack not only means no more last-minute trips to the mall for that hard-to-find connecter, but it also means that the television world will be missing out on some sweet advertisements. Fortunately, Quikteks is here to pick up the slack and provide your business with the technology you need to succeed.

What are some of your most treasured RadioShack memories? Which one of these featured commercials was your favorite? Do you have a favorite RadioShack commercial that we didn’t post? Let us know in the comments.