How to Diagnose Computer Issues

How to Diagnose Computer Issues 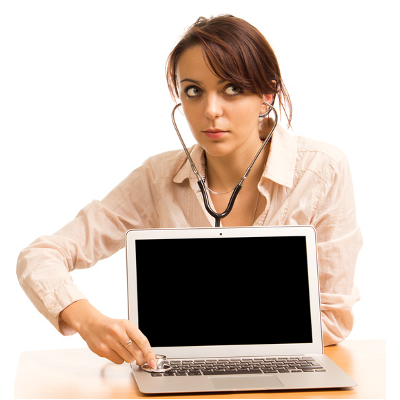 Your PC’s CPU (Central Processing Unit) is one of the many delecate components inside your computer. The CPU essentially does all of the thinking that your PC needs to do, processing instructions from your operating system and all of your programs. That might not seem like a big deal, but most CPUs today handle billions of processes every second. It doesn’t store data (that’s the hard drive) but if the CPU fails to work properly, you won’t be getting much work done.

The CPU acts like the brain of the computer. Without it, it cannot function. However, sometimes it can be difficult to diagnose a problem with the CPU. Some of these symptoms can be associated with other problems, such as bulging or leaking motherboard capacitors, faulty power supplies, or failing video cards. A quick once-over of these problems will tell you whether you are dealing with a “brain-dead” computer or not.

You Might Have CPU Problems If…
The characteristic symptoms of a CPU failure are pretty traumatizing, and if there is a problem you will realize it. Often, due to this, your computer will completely seize up or fail to boot up properly. Your system will completely freeze up immediately after booting up, or will stop working after a few minutes. If the fans are all running very high and the system isn’t turning on, you’re very likely dealing with a faulty CPU. Most people recognize the “blue screen of death”, which is technically called a system halt error, which will inform you that the processor (or sometimes another piece of hardware or hardware driver) is not working. Also, listen for system beeps; if there are none, then that is also a good hint that the CPU in your system has gone.

You’ve Been Thunderstruck
Have there been any intense storms in your area lately? Power surges can also cause the CPU to not operate properly. Just like many other pieces of hardware, too much power at one time can cause irreparable damage. Lightning striking the building, or more commonly, rebooting your computer after a power surge, are the most common causes of this problem. There’s not much that can be done about this – if a power surge occurs and the CPU is damaged, it will need to be replaced. While the CPU doesn’t store any data, if your computer is running during a power surge, important data can be lost. This is why backing up your data is so important.

In the event of a power outage, unplug your computer and wait for the power to come back on before plugging it in again. The best way to protect your PC from any abnormal power fluctuations is with an uninterrupted power supply (UPS). A UPS is a device that regulates power flow to electronics. It’s also equipped with a battery that provides power in the event of a power outage. Most UPS devices store just enough power for your workstation to shut down properly. Quikteks can provide you with UPS devices that will meet the needs of your business. It’s especially important to have a UPS device dedicated for your server.

Things Are Starting to Heat Up!
Whenever it gets too hot, people become sluggish – even the slightest movement is exhausting. Computers are the same way. The biggest reason that the CPU will burn out is because of too much heat. The CPU processes immense amounts of data at a rapid rate, which generates a lot of thermal energy. Most CPUs have their own cooling systems which will control their internal temperature, but sometimes these also die out with age. Ideally, the CPU’s temperature shouldn’t exceed 50 degrees Celsius. If your CPU is exposed to too much heat for too long, permanent damage will result. The biggest contributor to heat inside your computer is dust and other filth.

The best way to prevent CPU problems is with proper PC maintenances and close monitoring. This will ensure that the CPU isn’t being pushed to its limit and overheats. Give Quikteks a call at 973-882-4644 to keep your CPU safe – it’s the intelligent thing to do!