How To Identify An Article Written By A Robot

How To Identify An Article Written By A Robot 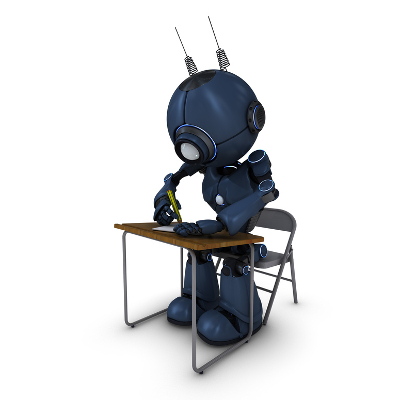 When your website has content or makes changes to its existing content, it can be of great benefit to your business’s marketing endeavors. In fact, it’s so important that innovators and programmers have built software that’s designed to perform the act of content writing. In other words, there are robots that compose web content. How does the writing of a robot hold up to that which is written by a human?

According to Slate, many organizations, like The Associated Press, Edmunds, and Yahoo, have turned to automation processes for producing content. This means that it’s grown common enough to invade the reading habits of the average consumer. Thankfully, for the time being, humans still have the upper hand in the art of content writing due to a number of reasons, including the ability to think critically and behave like a human being.

So, how can you tell if a robot has written an article? It’s usually pretty simple; if the text doesn’t appear to have a grasp of the underlying concerns of a piece of writing, or it has a shocking lack of emotional investment, it’s safe to say that a robot probably wrote it (or someone with no personality wrote it, which is also a possibility). Humans are able to instill some sense of emotion into their writing, which is a clear one-up on computers, despite their impressive plethora of other advanced capabilities.

In contrast, a computer performs a vastly different role when it comes to producing content. With the power to process data and generate it quickly, they are, if nothing else, efficient. Despite this advantage, it’s unlikely that content produced by computers can have the same characteristics as that which is produced by humans.

Robotic Writing: The Benefits
Despite the significant sacrifice that robots make concerning human emotional attachment, there are some benefits that a computer holds over human writers. Computers, due to the speed at which they operate, are capable of pushing out text much faster than any human writer. This can be helpful for reporting on boring, cut-and-dry topics that human writers might find difficult (or at the very least, monotonous) to write about.

Additionally, once the software has been built and installed, it’s relatively simple to keep running. Basically, it is a machine equipped with software, so as long as these are maintained, the operating costs of using a robotic writer is more efficient than accounting for breaks, sick days, and the all-important salary. Basically, robotic writers are good for writing articles that humans don’t want to write, and the kind of articles that readers… well, don’t want to read.

Humanity’s Counteroffensive
In response to the computer threat, humanity has the enduring hope of ideals, feelings, opinions, and the human mindset in general. The machine isn’t able to understand the text on a fundamental level. It might be able to interpret it, but it can’t be emotionally invested in it the way that humans can. They have no prior experience to recollect and reflect upon; hence, their inability to create interesting and relevant articles.

What it comes down to for humanity is our ability to call upon past knowledge and use it to add something of value to the text. Computers lack the ability to use shared experience to connect to the audience, which puts the context of the text on the line.

While computers and humanity might differ in their approaches to the writing of content, they can work together to produce both dull, boring content, and text which can connect to the audience and engage them. Be sure to let us know in the comments what you think about robot writers, and whether you think this article was written by a computer or not.