A Zombified Botnet is as Scary as it Sounds

A Zombified Botnet is as Scary as it Sounds 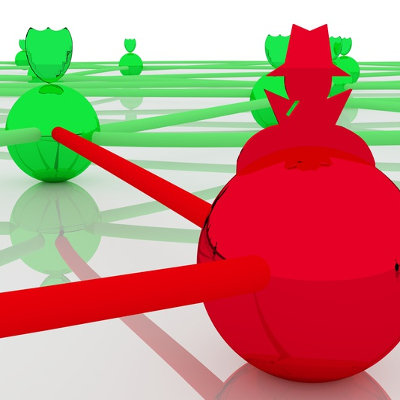 In the world of computer security there’s a new challenge for professionals fighting against cybercrime: botnets. Hackers can used them to carry out Distributed Denial of Service (DDoS) attacks that bring down servers and services, and are using large numbers of remote-controlled zombie computers as a weapon in their criminal activity. How can you keep botnets from causing damage to your business?

In case you’re not familiar with botnets, here’s a quick explainer. They are networks of computers that have been hijacked and infected with malware. That malware allows a single-host server to acquire command-and control functionality. People whose computers have been compromised are often unaware that their system has been infected and only discover the reality after the damage has already been done. Meanwhile, the infection is either transmitted to as many computers as it can reach or the traffic is used to generate DDoS attacks. They then ping a website or server until it can no longer cope with the amount of traffic directed to it. Hackers using botnets may also manage to use click-throughs on website ads to make large amounts of money.

One of the reasons that botnets are such a problem is that they are very easy to access. If you’re a cybercriminal, you’ll be able to find DDoS-for-hire botnets that don’t cost a huge amount. What makes them especially dangerous is that they’re easy to use, even for wannabe hackers with no real experience of how they work. About 40%of DDoS attacks on networks are thought to originate in these botnets.

While there may be a lot of trouble caused by individuals out to cause trouble, bigger and more complex botnets are even used by some government agencies and criminal cartels. These are beyond the capabilities of the average hacker, cost more to operate, and they typically work on a much bigger scale. These DDoS attacks can exceed several gigabytes per second. According to Corero Network Security, attacks that work at 10GB/second or more have recently increased by 25 percent. These are scary numbers.

The chances are that most of us are vulnerable to standard zombified botnets rather than those sponsored by states or big criminal organizations. However, that doesn’t mean they’re not dangerous, since they’re still capable of spreading a whole lot of chaos from computer to computer. As the spam gets sent out, more and more computers are infected with malware, more and more systems are brought into the botnet and the problem gets harder and harder to control.

It’s not easy to protect against botnets and DDoS attacks, but there are measures you can take to protect your business. Enterprise-level security solutions are designed to protect your inbox from malware-laden spam. Outsourced remote monitoring and maintenance solutions provide non-stop monitoring of your traffic, and are geared to picking up the telltale signs. This allows you to get on with your business, secure in the knowledge that the possibility of pending attacks is always being checked.

Quikteks can provide your company with the tools needed to keep you safe from these advanced threats and other cybercrime. To learn more, reach out to us at (973) 882-4644.