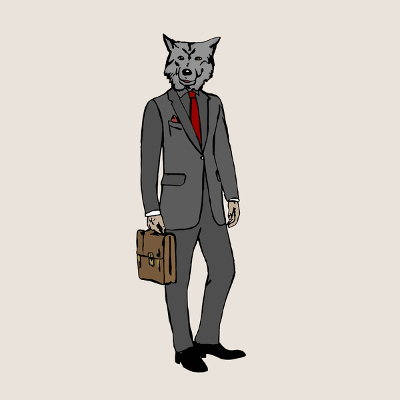 Happy April Fool’s Day! It’s a time to celebrate pranks, practical jokes, and laughter. Therefore, we thought we’d mix it up a bit and seek out technology advice from the funniest and the furriest CEO we know, Old Spice’s wolf-dog hybrid, Mr. Wolfdog!

First off, if you’ve not yet been exposed to Old Spice’s Mr. Wolfdog character, then watch his first video: “Meet Mr. Wolfdog.” In this video, you find out exactly why a wild animal is sitting at a business-looking desk and speaking through a “patent-pending” electronic voice collar that translates Wolfdog communication into English.

Surprisingly, it turns out that Mr. Wolfdog knows a thing or two about business technology.

How to Operate Computers Successfully for Business Leaders of Tomorrow Today
This two-minute tutorial video is from the critically acclaimed “Director Wolfdog’s How-to Video Series,” and it’s on point. Check it out:

“Get a giant honking computer masterpiece.”
Going by Wolfdog’s logic, in the wild, bigger is better. Size helps you dominate the rest of the food chain. Therefore, you’re going to want the largest computer possible in order to dominate the competition. So, toss those flimsy tablets and smartphones in the garbage, and dust off your beige beauty from 20 years ago, because that is how you’re going to get ahead!

Quikteks disclaimer: Despite this being solid logic, it’s definitely NOT a best practice.

“Because turning on a computer is the most dangerous thing you’ll ever do.”
While we wholeheartedly agree that improperly handling technology can be dangerous (the risk of electrocution is real), generally speaking, turning a computer on presents little-to-no risk. You don’t need two layers of gloves to operate a PC, and poking a computer with a stick is a no-no.

However, if you do decide to pop open the computer case for a DIY repair job, then you’re going to want to take protective measures. For intricate work like replacing a PC’s electrical components, we highly recommend that you let the IT professionals handle this, like Quikteks.

“Then, slap your fingers across the keyboard in a rapid fashion. It doesn’t matter what you type, you just made money.”
Not true Wolfdog. Actually, if you randomly click on everything and type like a madman, you might end up messing with the PC’s settings, and perhaps even deleting some important files. Now, we’re all for productivity and enacting solutions that allow employees to work smarter and faster, but Wolfdog’s hilarious approach is simply the wrong way to go about it.

“Quickly open every application on your computer and type into all of them at the same time. This will cause your computer to smoke.”
Technically, your computer will freeze up and crash before getting to a point where smoke billows out of it. However, overheating is a very real risk for an overworked PC. Fortunately, the limitations set by hardware and software manufacturers don’t let you overwork your computer to this point.

Quikteks disclaimer: a computer with black smoke coming out of it is not a good sign, and your superiors won’t be impressed by it. If you see smoke coming out your computer, be sure to unplug it, open a window, and give Quikteks a call at (973) 882-4644. Also, if you are working your PC too hard, it may become slow and unresponsive. Rebooting it might be the answer, but these symptoms could also be from underlying issues that may take a technician to diagnose and resolve.

“Now you can use computers to do anything, like play video games or print out important business emails.”
Right you are Mr. Wolfdog! Of course, video games and printing out a business email “with just a hot dog with some mustard on it that says ‘CAKE NUMBERS’” is just the start of what computers can do for your business. You of course know this, but it may be worth it to have a conversation with Quikteks about finding new ways that technology can work for you. We can introduce you to business technologies beyond computers that will make you more money (like maybe a “patent-pending” electronic voice collar).